Breathe has a cover. The artist is Valerie Tibbs, and I think she did an amazing job representing the story. Thanks, Valerie! 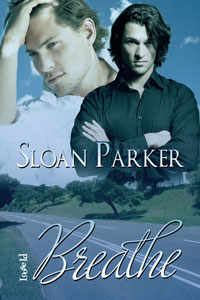 Lincoln McCaw lost everything–his home, his job, his partner–after he caused a fatal accident. A year later, he’s drowning the guilt and despair in whiskey, but he needs to move on. His sister and her kids are counting on him. Then he meets a man who ignites a passion Lincoln thought he’d never find. Too bad one night is all they can have together. Now he needs to figure out how to turn away from the only person who makes him feel alive…before whoever is sending him threats decides Lincoln needs to suffer more than he already has.

Jay Miller is surrounded by grief and misery until he finally gives in to all those years of sexual fantasies about being with another guy. Realizing he’s ended up in the arms of the man who caused his wife’s accident, he tries to pull away. But can he give up a friendship he needs more than anything–a friendship and a love that could save him? Or will someone else destroy it all?

It’s also been added it to Goodreads if you’re interested in adding it to your bookshelf:

14 thoughts on “Cover for Breathe”