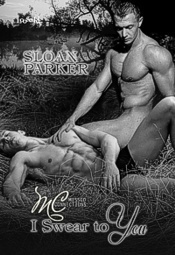 A big thanks to Chris at Stumbling Over Chaos for hosting a giveaway of my latest release, I SWEAR TO YOU.

To enter for a chance to win, leave a comment on the blog post here stating that you are entering the contest. The giveaway closes 7 pm CDT, Monday, May 19.

Thanks to everyone who’s already picked up a copy of I SWEAR TO YOU. The book made the overall bestseller list at All Romance eBooks and when I last checked it was in the top 20 in the Gay Romance category at Amazon. THANK YOU! I hope you’re enjoying Grady and Mateo’s story.

Today’s winner of the I SWEAR TO YOU Release Party Giveaway is:
Kelsey O. Congratulations!

I SWEAR TO YOU is now available at Amazon!

Here are some behind-the-story tidbits from my writing of Grady and Mateo’s story: