I am nothing special; just a common man with common thoughts, and I’ve led a common life. There are no monuments dedicated to me and my name will soon be forgotten. But in one respect I have succeeded as gloriously as anyone who’s ever lived: I’ve loved another with all my heart and soul; and to me, this has always been enough.”

— Noah Calhoun from The Notebook 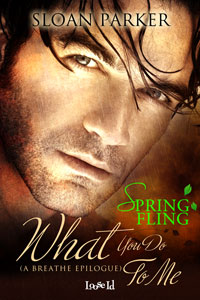 The short epilogue for my novel Breathe is a free download at Loose Id’s website this week until April 28th.

You can download a copy of WHAT YOU DO TO ME at:
http://www.loose-id.com/what-you-do-to-me-a-breathe-epilogue.html

Description
Not many people in their small town are likely to understand how a widower can be with the man who accidentally killed his wife. Good thing what Jay wants—and deserves—is all that matters to Lincoln. Despite all the threats and anger and gunshots aimed at them over the past few months, they are determined to continue exploring the undeniable passion between them and build a new life together. Jay and Lincoln’s happily-ever-after is showcased in this epilogue to the best-selling novel Breathe. 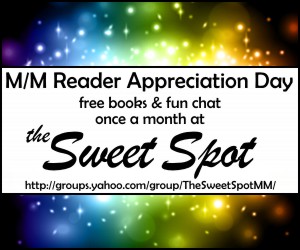 This Saturday, April 20th is another Reader Appreciation Day at the Sweet Spot Yahoo Group (hosted by me, SJ Frost, and Jambrea Jo Jones). Stop by to enter the giveaway, read excerpts, and chat with authors of M/M romances. The giveaway runs from 8 am – 8 pm EST.

The following authors have generously donated these books or other prizes. Thank you, authors!

Hope you can join us at The Sweet Spot Reader Appreciation Day on April 20, 2013.

“But the vast majority stands against that darkness and, like white blood cells attacking a virus, they dilute and weaken and eventually wash away the evil doers and, more importantly, the damage they wreak. This is beyond religion or creed or nation. We would not be here if humanity were inherently evil. We’d have eaten ourselves alive long ago.

So when you spot violence, or bigotry, or intolerance or fear or just garden-variety misogyny, hatred or ignorance, just look it in the eye and think, ‘The good outnumber you, and we always will.'”

-Patton Oswalt in reaction to the Boston Marathon bombings