Just wanted to let everyone know I’ll be taking a week or two off from blogging. I’m a little behind on some non-writing work, plus I really want to make significant progress on my current manuscript (my friends-to-lovers story) in the next few weeks. I’m about halfway through my first pass of revisions (filling in the plot holes and writing some missing pieces). I’ve also done another pass on chapters 1 through 10. It’s really starting to come together. I don’t want to lose this momentum, so I’m going to stay as focused as I can while catching up on a few other things. Which, unfortunately, means less time on-line.

I’m excited about this story. In fact, I’m feeling more confident about the overall plot than anything else I’ve written yet.

I’ve also made the decision to rename it (nothing selected yet, though). A recent m/m release has the title I had been considering, and I’d prefer to keep my title as unique as I can, at least within the same genre.

I’ll post a draft blurb and excerpt after I pick up blogging again. Should be in a week or two. Until then, I’ll be in the writing cave, falling in love with these guys all over again.

Have yourselves a lovely weekend!
Sloan

Was watching an old episode of Brothers & Sisters the other day and thought I’d share one of my favorite quotes from the show. This one always makes me think of my honey. There’s nothing like knowing you can be exactly who you are and be loved for it.

Kevin: You know, it’s like all these crazy people in my family are in this insane freefall and completely incapable of being happy. And then I look at Saul, who… who’s missed his life entirely. And I realize how lucky I am because I get to come home to someone who is kind and caring, and who changes the lightbulbs… and… marry me.

Kevin: I mean it. I don’t want to wait. I want to make this official.

Scotty: Because I changed the lightbulbs?

Kevin: No, well, yeah, kind of. Because, Scotty, that’s who you are. I’m completely, completely in love with you. I even love the things about you that I hate. Because you make me feel like I don’t have to be anyone other than who I am. And to me, that feels like family, and that’s what I want us to be. I want us to be a family because that never ends. I’m doing this all wrong. [gets down on his knees] Scotty, I’m asking you. Will you please marry me?

About the EPIC awards:
EPIC eBook Awards entries are judged by volunteers, with the largest percentage of EPIC eBook Awards Judges being active EPIC Members. Guest judges, all of whom are either published authors or publishing professionals, may be used as alternate judges at the EPIC eBook Awards Committee discretion. After the first round of judging the works of the finalists are sent to second panel of judges and winners are selected.

I’d like to congratulate all the finalists and winners of this year’s awards. I’d also like to thank EPIC and all the volunteer judges for their time and effort in putting together this yearly event. And lastly, thanks to Antonia, Treva, and everyone at Loose Id for all their support and hard work helping me with my first release.

I’m absolutely thrilled MORE won, but I will admit it was hard to be too excited about the award while watching the devastation in Japan. My heart goes out to all those so deeply affected by this disaster.

In 2005 I started getting more serious about writing than I ever had in my life. I began working on a few stories that had been wandering around in my brain for a while. I would get up early so I’d have an hour to write before work. I’d spend most of my lunch hour writing, sitting at the park with a tablet of paper propped against the steering wheel in my little Cavalier when it was too cold to venture outside. It was all me, writing in my own little world. No audience. No one else to judge or criticize the work. It was a great time of exploration and wonder.

Then in 2007 I got even more serious and gave up the corporate job for (what was supposed to be) a smaller, less intense series of freelance jobs which would ultimately leave me more time for writing.

At that time, I also gave up all of my hobbies and other pursuits. I watched far less TV and movies than I ever had in my life. I was determined to spend all my free time reading and writing. After I finished my first m/m manuscript, I realized my work wasn’t submission ready. I started a new manuscript and went back to the basics. I studied grammar for months and read stacks of articles, blogs, and books on the craft of writing. I joined Romance Writers of America. Every hour I spent studying and rewriting was worth it. I learned a great deal and was propelled forward into a new phase of my writing life.

When I was almost ready to submit the next manuscript (the first I would send out) I started in on researching the other aspects of the business of writing: publishers, building a platform, and options for promotion and marketing in this niche genre. I followed various authors in the genre and made notes on what I liked and didn’t like about their promotion efforts; the way they interacted with readers and other authors; how they represented themselves on blogs, Facebook, and Twitter; and which publishers they worked with and why. Yes, I was a stalker. Still am in some respects. It helped me develop my own plans and goals for my writing career. My main goal became to maintain (as much as I could) 3 qualities in everything I do: be positive, professional, and genuine.

So what am I rambling on about here? Well, after three and a half years, I finally realized something. I needed to take a step back. I needed to find a few other joys in life that were just for me besides my writing. I was still spending time with family and friends, going out and doing some fun stuff (occasionally, at least) but when I was home, I was focused on one pursuit. I had given up all my hobbies, all of the things that had nothing to do with the written word.

So I’ve started a garden. This year it’s going to be a small container garden outdoors and some potted plants and flowers inside. (Yes, sadly all the plants I had previously grown died years back). The SO has agreed that I can use part of the closed-off exercise room for my indoor plants so the pesky little feline members of our family won’t destroy them. I’ve always enjoyed gardening and caring for plants and am really looking forward to this, albeit minor, pursuit. Although, I know very little about gardening, so this will also be a learning experience.

Check it out. Here’s the start. These were little seeds not too long ago. I’m ridiculously excited about these little plants. They are the first things I’ve grown in years. 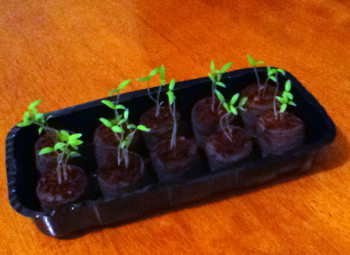 I still believe that writers need to be devoted to reading and writing as their main interest (you can’t be a serious writer if you spend forty hours a week watching reality TV or chatting on Facebook), but we also need balance. Balance is good for so many things in life.

Wish me luck on my “garden” this year. I think I might need it.
Sloan

Have you seen the new ARe cafe at All Romance eBooks? I’m still learning my way around, but it looks pretty neat. You can post a status, connect with friends, join groups with other readers, check out recommended reads, see what’s being reviewed, and integrate it with your Twitter and Facebook. There’s even an m/m group called Mmmm… M/M Romance. Here’s the groups description:

“Here is the place for lovers of m/m romance, from sweet to spicy, to discuss what’s hot now. Talk about your favorite manlove authors and recommend titles for readers new to M/M goodness!”

If anyone is a member of the cafe, I’d love to connect with you. Here’s a link to my profile. Feel free to send me a friend request.

It looks like a neat place for readers to hang out. Hope to see you there!