“Everyone thinks they can write a book. The only people who really know how hard it is are the ones who have tried.”

I like statements like this. They help keep me sane. Writing isn’t always easy, but it is also one of the most rewarding things I’ve ever done. There’s nothing like opening a blank document and filling it with words until you have a story you love, characters you’re proud of, a romance that inspires.

Any other writers feel the same? How about you readers … do any of you have aspirations to write a book? Comment or send me an email. I’d love to hear from you.

I have great news …

For fifteen years Luke Moore has lived by three rules:  stay off his father’s radar, never spend more than a night with any man, and never fall in love again. With one night of explosive sex and two men whom he can’t get out of his head, Luke gets tangled up in more than he ever imagined. Richard and Matthew push him past all his boundaries—both in and out of the bedroom—and now he’s no longer hiding from his senator father; he’s taking him on. And he isn’t just falling for one man; he’s falling for two.

But Luke’s father has his reasons for hating how his son lives, and he’ll do whatever he can to keep Luke away from Richard and Matthew. Even murder.

Just want to say thanks to all the great writers I’ve met for the invaluable information and encouragement that’s helped me get this far in my journey as a writer. And a huge thank you to my partner, Rosie, for all the support and love on my crazy path to publication. Thanks, hon!!

Once a month I post a brief update on my writing projects. Here’s this week’s update …

Almost have the first draft of The Whiskey Sipper done. 2 1/2 scenes left to write. Based on some changes there’s about 4-5 scenes that’ll need rewrites since I made a major shift in the novel after the outline was done. But I’m really happy with the change and with the story. I’m sure I’ll be happy with the writing later. I never like a first draft or maybe not even a tenth draft. I tend to write, rewrite, rewrite, and repeat for days and days. It works for me. I think I upped the supsense plot and the conflict between Jake and Lincoln quite a bit. Even I wasn’t sure how they were going to end up together. Gotta love it when I throw crap at my characters.

This weekend, I went to my first brainstorming session with a group of local writers. There was drinking and talking and hysterical laughing and yes, mud-slide jello shots. I do believe one woman slid off her chair and laughed herself to the floor. But we also brainstormed a ton of great ideas. It was fun to bounce ideas off one another. And these people were highly creative!! I was impressed. I was leery of what such a session would be like, but I really enjoyed it. My creative energy got a surge. And not from the jello shots. 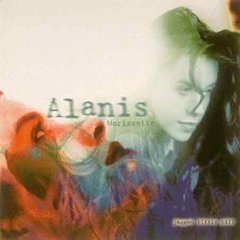 Even after all these years, I’m still loving Alanis Morissette’s Jagged Little Pill. I listened to it while writing last week (hadn’t listened to it in a year or two). Sometimes I need silence when I work. Sometimes I like the background noise and little bits of familiar lyrics that encourage my creativity. And when I heard the creepy, stalkerish song at the end of the disc, it reminded me how much I loved this CD.

I’m thinking there’s some inspiration for a short story there. I’ll have to think it over.

What about you? Anyone else still a fan of Morissette’s work? Comment or send me an email. I’d love to hear from you.

Once a week, I post a quote that I’ve read/heard recently. So here’s this week’s Quote I love from a classic and classy show…

I was watching an episode of Golden Girls this past week, and I saw this one scene I had forgotten all about.

Rose and Dorothy had just found out a man they knew had a sex change operation years back. Rose asked the following questions. It’s perfect Rose. Gotta love her facial expressions.

Rose: I’m still confused about the operation that Gil Kessler had. Is the man asleep during it?
Dorothy: I think so.
Rose: And what about the parts they put on? Do they test them first?
Dorothy: Of course, Rose. You know, like windshield wipers.
Rose: So they work?
Dorothy: I assume so, yes.
Rose: [Brief pause] …What are they made of?
Dorothy: [irritated] Silly Putty, Rose!

Years after first airing, this show is still funny. I loved how they showed these older women as sexual beings. I loved how they never held back when talking about sex (like the scene where the girls were going on a cruise and they bought some condoms so they would be prepared on their trip.) I also loved the show’s support of gay issues (when not many shows were doing so).

Anyone else still watch this show? Comment or send me an email. I’d love to hear from other fans of the show.