It’s official. I’ve signed a contract for TAKE ME HOME, my love story about two friends finding their way to what started 10 years before with one passionate night that ended too quickly. Tentative release date is December 13, 2011 from Loose Id. Sometimes Loose Id will adjust their schedule closer to the release date, but I’ll keep you posted if that happens.

Thanks to all who commented on the blog, sent an email, or have chatted with me on Facebook, Twitter, and elsewhere for your support while I was working on this manuscript. 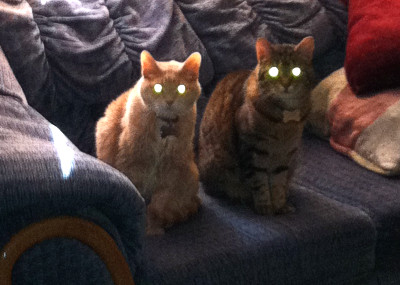 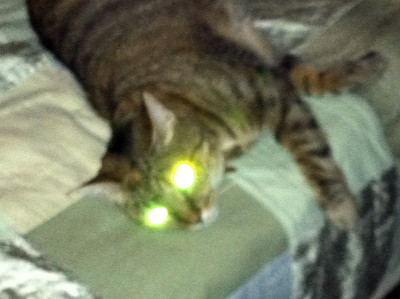 Apparently I need to figure out how to take better pictures with my iPhone or my cats are possessed.

As of last week, I finished writing TAKE ME HOME, and now I’m back working on Walter and Kevin’s story. If all goes well with my submission and I sign a contract for TAKE ME HOME, I won’t be sharing any more excerpts until the book has been through the final round of edits, so I thought I’d share one last teaser.

Evan picked up the pages of his script. He was done trying to work, even if he couldn’t fall asleep right away. He wanted to know more about the dream, about what had gotten Kyle so turned on.

He headed down the hall and hesitated outside Kyle’s door. He heard the sound of slick skin over skin, an occasional grunt, the bed shifting. Evan couldn’t move. Either forward or back. He’d heard Kyle jerking off before. He’d always gone on about his business and given his friend a little privacy. Now…

He leaned his forehead against the closed bedroom door, listening to the sound of Kyle’s heavy breathing, the sound of his hand moving faster and faster.

Evan clutched the doorknob in his fist.

He’d just have to live with the fantasy. That’s all he’d have.

Then what was he doing?

He twisted the handle, and the door creaked as he pushed in. Every sound from Kyle stopped. The room was dark. The low light from the hall didn’t help Evan see Kyle on the bed, not even an outline of his body. Maybe he’d ask Kyle to wait a minute before he started jerking off again, at least until Evan’s eyes adjusted and he could watch him come. Too bad he couldn’t get his voice to work.

Despite the darkness, Kyle had to know Evan was standing there.

The sound of a hand moving over slick flesh started again. Slow at first, then picking up speed until it sounded faster than it had before he’d opened the door. Kyle’s grunts of pleasure grew louder.

That had Evan undone. He ached and wanted nothing more than to touch himself, to come with Kyle.

From TAKE ME HOME by Sloan Parker

Here’s the first preview if you missed it

“There’s this place in me where your fingerprints still rest, your kisses still linger, and your whispers softly echo. It’s the place where a part of you will forever be a part of me.”

Saw this on Amber’s tumblr and just had to share…

When people ask “So what do you like to do for fun?”