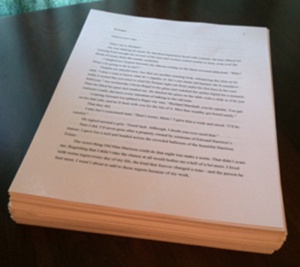 The finished manuscript of MORE THAN MOST. Image: (c) Sloan Parker 2014

I’m delighted to share that I just finished MORE THAN MOST, the sequel to MORE. I’m having someone give it a final review this weekend, then it’ll be off to my editor. Hopefully I’ll know more about a release date before too long.

Prior to working with my editor, it’s around 94,500 words. All Richard’s point of view.

A part of me thought I might never finish this book (for reasons that had very little to do with the writing of it), so I’m beyond excited right now and thrilled with how it turned out. I’m also grateful I didn’t write this sequel right after the first book. It definitely wouldn’t have been the same story. There’s a vulnerability to Richard I’m not sure I would’ve captured without some distance from Luke’s point of view. I know Richard now even better than when I was writing the first book.

And Matthew… there’s so much more I know about him as well, but I’ll keep that to myself until his story. All I can say is that I’m more in love with him than ever. Richard and Luke too.

I’ll share a preview in my next newsletter. In the meantime, there are several snippets from the book on my tumblr page.