Here are snippets from some of my favorites moments in the book (excluding the last few scenes as I didn’t want to give away too much for those who haven’t read the book yet).

“Well,” Luke said, finally breaking the depressing silence. “That’s one good thing about Matthew barely being old enough to shave. He can take care of us when we’re old.”

It was a rare occasion when Luke talked about our relationship as if it had no end. His words brought a smile to my lips.

Luke kept tracing the scar with his forefinger. Then all his fingers ran over my pecs, his attention no longer on the scar but on all of me. He met my stare as he reached up and gripped the sides of my neck in both hands. It was a tense, controlling grip, but I had no fear he would hurt me. This wasn’t about me, but about what he was feeling—the frustration and lack of control where his father was concerned.

He pressed our foreheads together. “God, I’ve missed you.” The words were barely a whisper against my lips.

So maybe this was about me.

I opened my arms, and Matthew moved into them, laying his head on my chest again. I lived for those moments—the intimate, sensual contact following the sex. I wanted to feel them, connect with them in a way that getting off didn’t allow. I loved to bring them pleasure in every way they needed, but the touching after, that was for me.

He looked back at me. The warm expression in his eyes told me that he knew I’d be there for him, no matter what. He knew I’d help him protect Matthew—protect all of us. He would never be alone in any of it.

In a rare declaration, Luke held Matthew’s face in his hands and said, “We will be. Always.” He leaned in and pressed his lips to the other side of Matthew’s neck, and I wound my arms around them both.

Matthew sighed like that had made all the difference.

I lifted up and caressed his cheek with mine, and in that moment I felt closer to him than I had since I returned from my business trip. The night spent with them, their help with the research, the intense sex afterward, the intimacy of lying there touching them both—it all gave me a sense of peace, a serenity nothing else matched. No matter what happened with the estate, I’d have Luke and Matthew and that was ultimately all that mattered to me. Anything else I could live without. But not them.

I waited, afraid if I moved I’d disrupt what needed to happen between them.

“I—” Luke held a hand out for Matthew, then dropped it just as quickly.

Matthew stepped forward and reached for that hand. “It’s okay.”

Luke met his stare and leaned in to rest his forehead against Matthew’s, gripping Matthew’s hand in return. “God, I’m sorry.”

There was no missing the moment his frustrated expression changed, the moment he gave himself over to what he really wanted to do. He leaned into my touch and nodded.

Tomorrow will be the last post of my release party. Hope you can join me.

I’ve become quite addicted to Pinterest. I love having one place to save pictures that inspire story ideas or ones that remind me of a particular story. Below are some of the pictures from my pinterest board for MORE THAN MOST. You can view the full board here.

To celebrate my new novel (which releases tomorrow!), I’m offering readers a chance to win a $25 e-gift card to All Romance eBooks and a bundle of Sloan Parker novels in print (Breathe, Take Me Home, and More Than Just a Good Book).

The giveaway starts today and ends at 11:59 PM EDT on Sunday, May 3, 2015. Click here for the full details on the giveaway and to enter for a chance to win. Be sure to return to the blog for my behind-the-story posts all week and to enter the giveaway each day to increase your chances of winning.

You can enter the giveaway once per day during the release party for a total of seven (7) entries per person. Good luck!

I’m so excited to share more of Matthew, Luke, and Richard’s story. The book will be releasing Tuesday, April 28th at Amazon, All Romance eBooks, Barnes & Noble, iTunes, and other stores. (It should actually go live at some sites Monday night EDT).

To celebrate, all next week I’m hosting a release party here on my blog. The party starts Monday, April 27th and will include behind-the-story posts and a reader giveaway with a chance to win a gift card and a print bundle of my novels. Full details on the giveaway will be posted next week.

I’ll be sharing one post per day, and with each blog post you’ll have a chance to enter the big giveaway. Be sure to check back every day next week to increase your chances of winning.

I would love to have you stop by and join the fun. And if you get a chance to check out MORE THAN MOST, I hope you enjoy it. 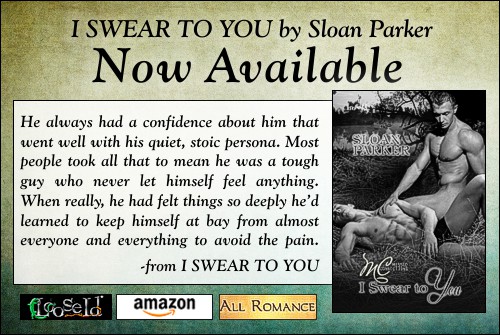 I SWEAR TO YOU by Sloan Parker:
He’s not going to run from his best friend this time. He swears.

Thank you to everyone who stopped by the blog to check out the release party posts and enter the giveaway, and for the kind words with your entries. Nothing means more to me than hearing from readers who’ve enjoyed my work. Thank you!

Here are today’s bonus winners (1 bonus winner per every 20 entries). There were a total of 89 entries. Since that’s close to the 100 mark, I’ve selected five extra winners for the week. Each have won a $10 e-gift card from All Romance eBooks and will be receiving an e-mail shortly.

And here is a recap of the daily winners:

Thanks again to everyone for taking part in my release party. I had such fun sharing all the pictures and tidbits about writing I SWEAR TO YOU.