Here’s my third selection in my “Favorite Scenes” series.

Why I chose this excerpt: This moment illustrates for me just how special being in that hotel room is for Sean and Gavin. For the first time, Sean feels like he’s getting a look at the real Gavin in a way he never had before. 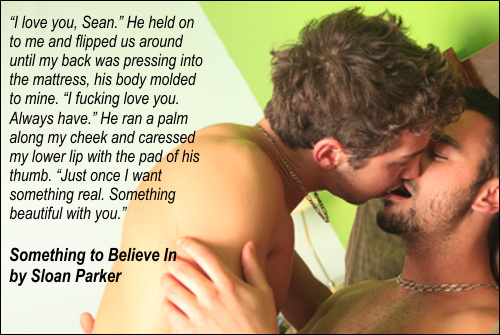 Gavin hit mute on the TV, tossed the remote aside. “Where’d you grow up?”

He lowered to the bed on his side, his head propped in his hand. Something about that action and the quiet stillness of the room around us gave the moment a different feel from any other we’d spent together.

Which was odd. Sometimes I’d felt completely alone with him when we were surrounded by men at the shelter.

Or at least, I’d thought that’s how I’d felt. Maybe I’d never been alone with the real Gavin. The one who was watching me now.

He reached out and laid a hand on my right thigh. “You came from there, so yeah, it is special.” He paused as if he wanted to make sure I got his meaning.

I wasn’t sure I did.

“In Ohio, right?” he asked. He rubbed my thigh, his hand so warm I could feel it through my jeans. The only time he’d touched me even close to the same way had been about warming me up after I’d trudged through the snow to the warehouse from the park in a worse snowstorm nearly a year ago. That touching had been clinical. Or at least I’d tried to pretend it had so my heart wouldn’t be crushed when he rolled over to go to sleep.

I nodded, my next words catching in my throat. I swallowed and tried again. “Angola, Ohio. This time of year, every house and all the shops lining Main Street are decked out in Christmas lights. There are giant stars on the telephone poles and reindeer pulling a sleigh in the town square. Like someplace you’d see on a postcard.”

“I guess. More like it has this quiet, polite normalcy. But you have to look close to see the real place. I mean, the kinds of people who actually live there.” I pulled at a loose green thread on the bedspread beside me. The thread kept on unraveling. Maybe I could pull all those ugly weeds out and leave behind something plain but more beautiful. “The people—they’re not so pretty.”

“Did you ever tell them or your grandparents you were gay?”

I gave up on the weed whacking and crossed my arms over my chest. “Thought we were gonna catch a movie?”

“Right.” He removed his hand from my leg, and I immediately regretted my words as he returned to the end of the bed and reached for the remote. He pointed it at the TV but paused before clicking on the sound, his back to me. “You are, though, right?”

Apparently so. He clutched the remote like it was a grenade, and if he let go, the room—and the two of us—would explode into a thousand pieces. I wasn’t sure he was even breathing.

He sighed and eased up on the remote. He started changing channels again, stopping when he hit some action, one of those low-tech time-travel movies with the former governor from California.

Gavin kept the sound muted, and the time-traveling cyborg guy didn’t seem as threatening without the sounds of his guns going off. It’s amazing what silence will do to a moment.

Slowly, he looked back at me over his shoulder.

His mouth turned up at the corners. “Yeah, I’m gay.”

There’s also a free read featuring Sean and Gavin on my website: It Says Love.